Alex Daugherty;
by Aymee Vasquez
Comments are off 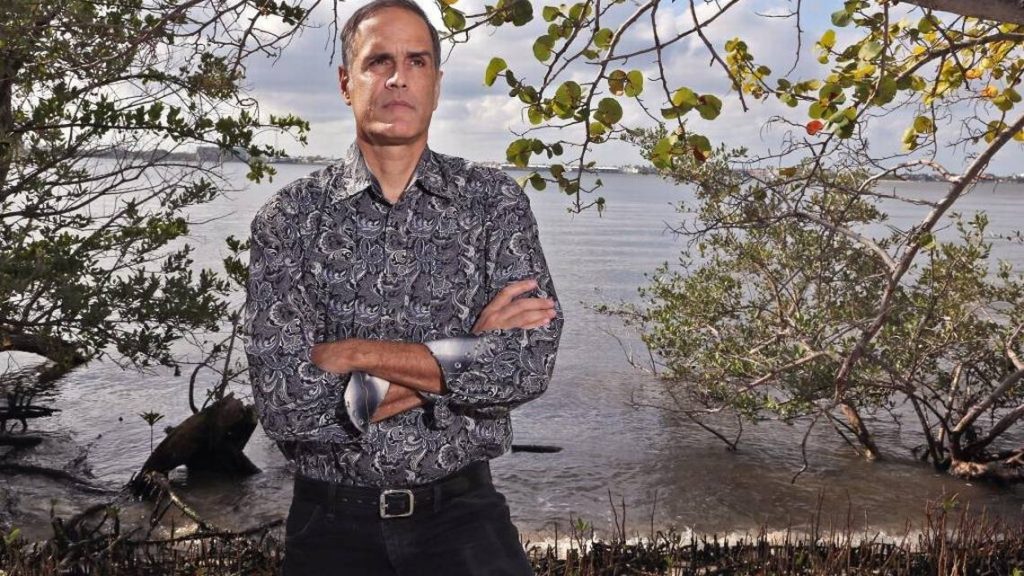 Fane Lozman stood on the steps of the Supreme Court with a confident smile on Tuesday, directing a cameraman to get the best possible shot of his six-foot-four frame with the Contemplation of Justice statue in the background. At this point, the semi-retired South Florida stock trader-turned First Amendment crusader is an expert in all things related to the high court. Lozman had just watched his second case in five years get argued before the highest court in the country, and he was confident that the nine justices will rule that Riviera Beach officials violated his right to free speech when they had him arrested 30 seconds into a city commission speech 12 years ago.
“The Chief Justice, he was very disgusted when he looked at the videotape,” Lozman said.
In 2006, Lozman stood up during the public comment period of a Riviera Beach city commission meeting and began speaking about the allegedly corrupt dealings of Palm Beach County Commissioner Tony Masilotti, and was ordered to stop. He didn’t, and he was arrested and removed from the meeting. At issue before the Supreme Court on Tuesday was the national standard for claims of “retaliatory arrests,” an issue that divides the lower courts. Lozman’s lawyer, Pamela Karlan, argued that the government could conceivably arrest political gadflys like Lozman who annoy them by throwing them in jail for short periods of time without actually charging them with a crime. Justices Anthony Kennedy and Stephen Breyer pushed Karlan on the difficult and often split-second decisions that law enforcement officers must make when deciding to arrest someone, and whether expanding the national standard for retaliatory arrests could make it harder for law enforcement to do their jobs in fast-moving situations like riots and political demonstrations. But Karlan argued that the existing protections on retaliatory arrests granted by the court “don’t mean much on the ground when dealing with local governments.” A seething local official could simply have a political opponent arrested for a minor, unrelated infraction, like going five miles per hour over the speed limit and then throw the offending party in jail for a period of time, Karlan said. Attorney Shay Dvoretzky, representing Riviera Beach, argued that the police officer who arrested Lozman at the 2006 meeting was not acting with malice, and instead made an immediate decision to arrest him because he was speaking about Palm Beach County corruption, and not Riviera Beach corruption. Therefore, his comments were off topic and grounds for removal from the meeting. “Isn’t Riviera Beach in Palm Beach County?” Justice Ruth Bader Ginsburg asked, prompting laughter from the courtroom. She added that it looked like a city council member who had previously expressed a desire to intimidate Lozman appeared annoyed during the video of Lozman’s speech and arrest, which could constitute malice towards Lozman. Justice Elena Kagan didn’t buy Dvoretzky’s argument either. “Mr. Kennedy was having difficulty with the hypotheticals of the petitioner’s case, but you’re having difficulty with the facts of your case,” Kagan said. “I’m sure there’s one [gadfly] in every town, and there’s a lot to be arrested for. That’s a pretty big problem.” Chief Justice John Roberts said he found the video of Lozman’s arrest “pretty chilling.” “He’s up there for 15 seconds and then led off in handcuffs,” Roberts said. A narrow ruling in Lozman’s favor would likely apply a higher standard for arresting someone in a controlled setting like a city council meeting, while continuing to give law enforcement a wide berth to arrest someone in a non-controlled setting like a large demonstration. “Though it’s a 1-in-1,000 case, I think at the end of the day they can’t let the First Amendment go by the wayside,” Lozman said. Lozman, an independently wealthy man with enough money and time to spend years in litigation, estimates he’s missed “about 50 weekends of fun” working on this case. That doesn’t count his work on previous Supreme Court case in 2012, where the justices ruled that Lozman’s floating home was not a “vessel” and therefore not subject to the federal maritime jurisdiction that eventually led local officials to seize and destroy his floating home under eminent domain laws. He won that case in a 7-2 decision, and Roberts later said Lozman’s lawsuit was “my favorite case from the past term.” But he continued to pester local officials. Lozman said he’s been to about 20 Riviera Beach council meetings since his arrest in 2006, though he hasn’t been back since 2015 because of his ongoing litigation against the city. But Lozman is planning to get back to the Riviera Beach commission soon and continue his political activism as he pursues his dream of building a “modernistic, stilt home community” in Palm Beach County. “Now that the litigation is wrapping up,” he said, “I’ll be there more frequently.” Miami Herald staff writer Glenn Garvin contributed to this report. link to Miami Herald story »