Palm Beach Post;
by Aymee Vasquez
Comments are off

The U.S. Army Corps of Engineers and multimillionaire Fane Lozman resolve a dispute he blames on ill will from Singer Island condominium residents.

After being sued by state and federal environmental agencies, longtime Riviera Beach nemesis Fane Lozman has won the right to keep his floating home in the Intracoastal Waterway – at least for now. As part of a settlement inked this month with the U.S. Army Corps of Engineers, the self-made millionaire and self-described corruption fighter must file for a permit to keep the home on submerged land he owns near Little Munyon Island. 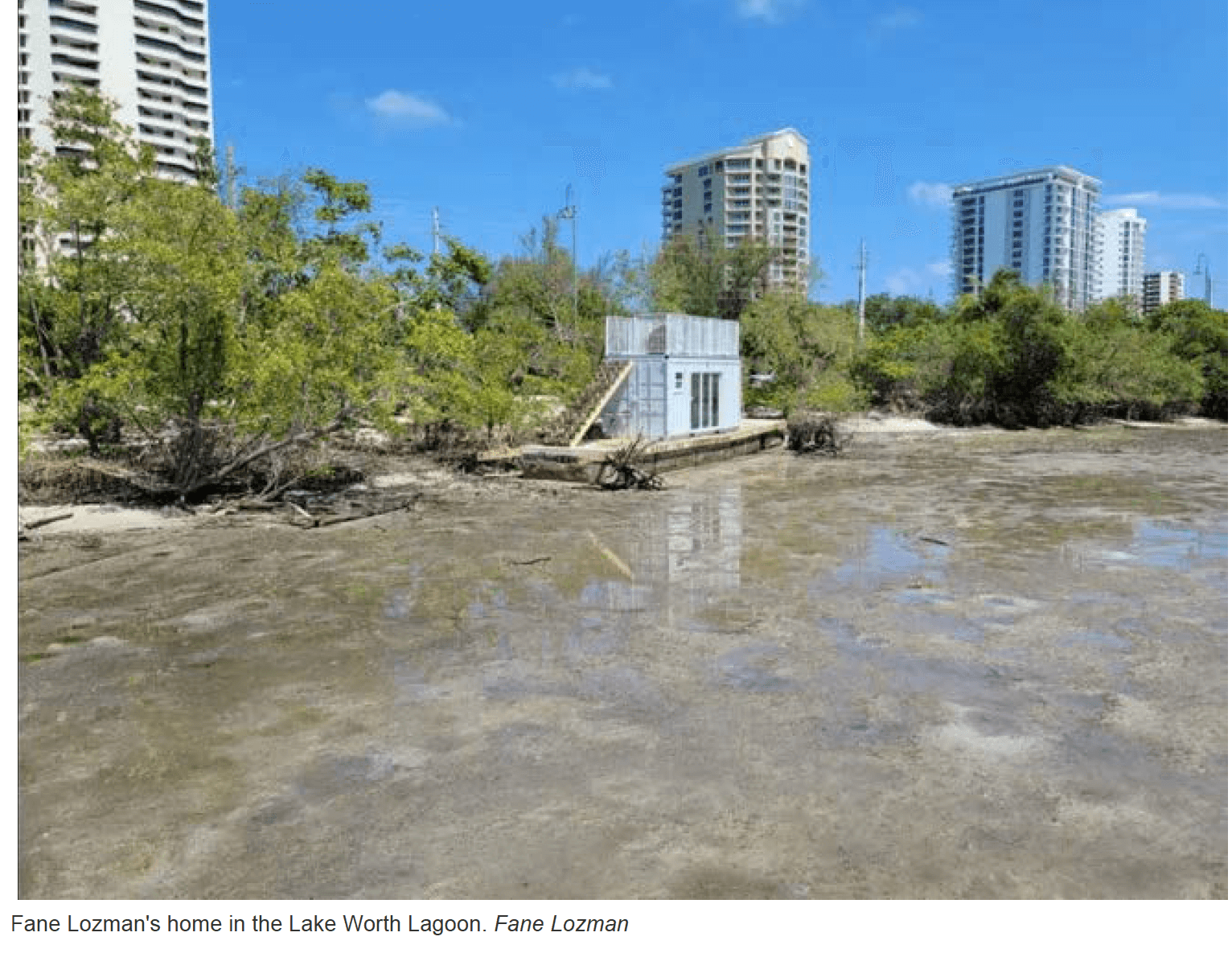 Lozman, who has twice taken Riviera Beach to the U.S. Supreme Court and won, said the settlement is yet another victory. “I’ve always wanted to put pilings out there,” he said. “At least I'll be on a solid mooring. It’s really a great deal for me.” Lisa Interlandi, executive director of the Everglades Law Center, said the agreement is also a win for the environment. Lozman’s floating home, a container with sliding glass doors and a rooftop deck atop a 980-square-foot dock, is in one of the most ecologically rich parts of the Lake Worth Lagoon, which stretches from the Boynton Beach Inlet to north of the Palm Beach inlet. “I think it’s good because he’s not going to be able to pollute the lagoon with floating docks and whatnot,” said Interlandi, who lives in a waterfront house in North Palm Beach. “It means that if someone wants to do something like that, they have to go through the legal process to do it.” Under the agreement, Lozman has two months to apply for a permit to install pilings so the floating home can be moored. The corps, which accused him of violating the Rivers and Harbors Act by blocking navigation, agreed to process his application “promptly and in good faith.”

Push for compromise: Fane Lozman, environmental regulators must seek settlement over floating home, judge says Three governments at once: Coming off 2 U.S. Supreme court cases, Fane Lozman takes on Riviera Beach, the state and the feds Another settlement: Fane Lozman ends long battle with Riviera for $875,000 Partially sunken vessels litter Intracoastal, judge noted When the corps cited him in January after some of the floating docks and the home got loose and drifted across the Intracoastal, Lozman didn't act. So the U.S. Department of Justice filed suit against him in federal court in West Palm Beach. In the meantime, the Florida Department of Environmental Protection sued Lozman in Palm Beach County Circuit Court. The state agency claimed the home, then tied to the shoreline on submerged land he owns along Singer Island, was damaging sensitive seagrasses that provide valuable habitat for endangered manatees, threatened green sea turtles and other marine life. However, when Lozman moved the home to comply with a circuit judge’s order, he further ran afoul of the federal navigation laws.

At a hearing in October, U.S. District Judge Donald Middlebrooks said it appeared that Lozman was caught between conflicting federal and state laws. Further, photos Lozman showed during the hearing convinced Middlebrooks that the Intracoastal is littered with partially sunken vessels. Even though some pose a greater threat to navigation than Lozman’s floating home, no efforts are underway to force their removal. Middlebrooks ordered attorneys for the justice department to meet with Lozman to try to settle the lawsuit. He signed off on the settlement but agreed that the case could be reopened if problems arise. 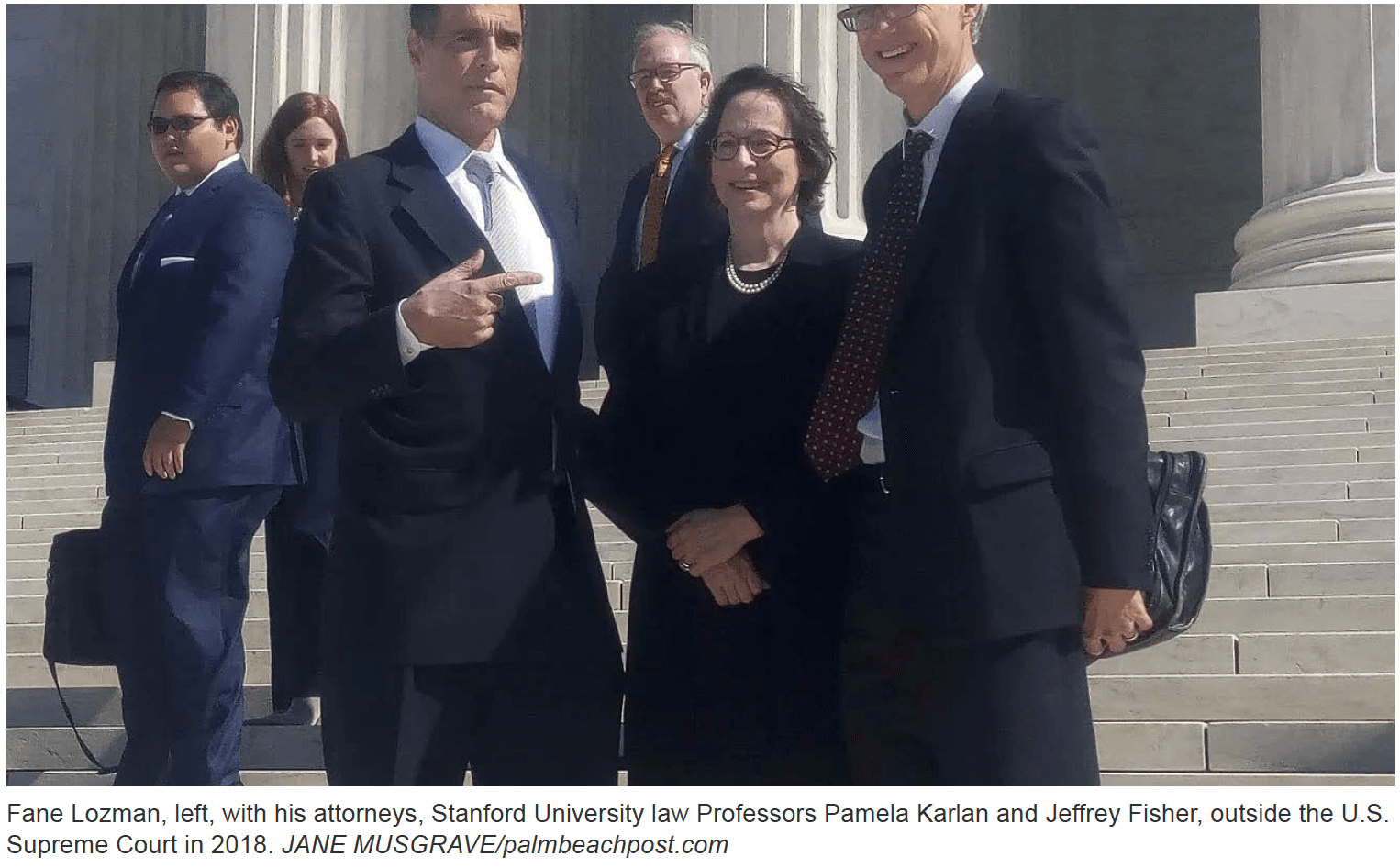 While the dispute has been resolved, another one looms.

Lozman, who now lives in Miami, has made no secret of his plans to build multimillion-dollar homes by filling and building seawalls on the roughly 71 acres of submerged land he and others own along Singer Island.

He claims the land, which includes a ribbon of upland, was zoned for residential development when he bought it and Riviera Beach illegally took away his property rights by rezoning it for preservation.

Further, he said, he plans to add a hull and an engine to the floating home so he can easily move it around.

He insisted the litigation launched by the environmental agencies was a waste of time and resources. It was undertaken solely to appease those who live in Singer Island.

He blames disgruntled condominium owners for vandalizing his floating home and cutting lines that held it and the docks in place when it was anchored near shore. He suspects they pushed the government agencies to get involved.

But, Lozman said, he knows how to fight government. In 2013, he convinced the nation's high court that Riviera Beach illegally seized and destroyed one of his previous floating homes. Five years later, justices ruled that city officials wrongly tried to silence him by having him arrested at a city commission meeting.

"If you just keep fighting, the truth comes out," he said.

The recent battle ended quickly because the facts were on his side, he said.

“This was a ridiculous exercise to try to intimidate me,” he said. “They ran into a judge who realized their arguments were full of hot air.”